Chambanamoms.com is the top online resource for families in the Champaign-Urbana area.
Learn More | Advertise
You are here: Home / Blog / Being a Jew in C-U / What You Need to Know about Hanukkah

What you need to know about the most well known of Jewish holidays.

Hanukkah, the Jewish Festival of Lights, starts the night of December 10 (Thursday) this year. This holiday is quite well-known because of its proximity to Christmas, but how much do you really know about it?

We thought we would answer a few of the most frequently asked questions about Hanukkah (or Chanukah or Hanukah or Chanuka) here.

Hanukkah may be one of the most well-known Jewish holidays, but it is hardly the most religiously significant.

Hanukkah celebrates the aftermath of a military victory by Jews (the Maccabees) who fought the religious oppression of Assyrian rule more than 2200 years ago.

The Jews took back the holy Temple in Jerusalem, which had been desecrated by the Assyrians, who had used it to worship idols and allowed farm animals to reside there.

Hanukkah celebrates a miracle — when the Maccabees wanted to light the menorah as part of the re-dedication, they could only find a tiny flask of oil, enough to light it for only one day.

As the story goes, a miracle happened when the oil actually lasted for 8 days. (Think of it this way: it would be as if your phone was on 10 percent and you had no charger, but it stayed on for eight days!)

While the message of Hanukkah is a beautiful one – one that celebrates faith, miracles, and dedication to our people and our traditions — the story is not found in Jewish scripture.

We found this meme for Hanukkah 2020, and well, couldn’t resist it. 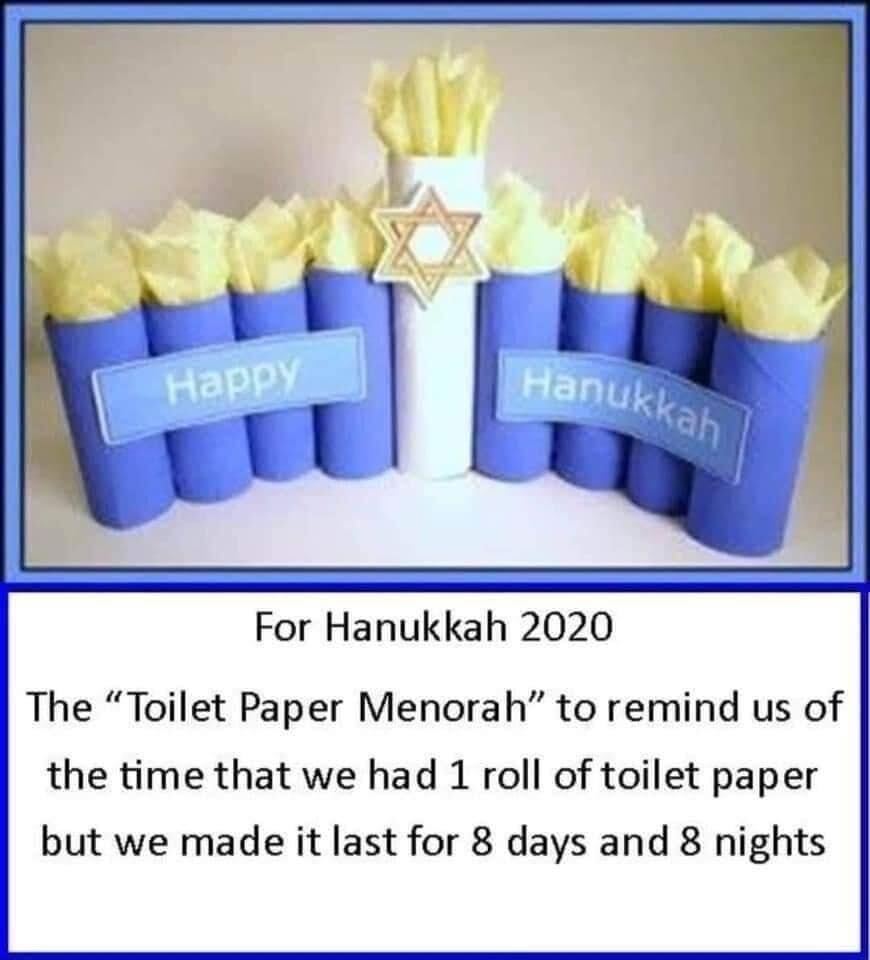 Work doesn’t stop on Hanukkah, nor do other regular activities.

Unlike some Jewish holidays, we don’t take any time off work or school for Hanukkah observances.

Most years, I routinely get asked if we will go “home” for Hanukkah (i.e. to be with family). We typically go “home” for the “major” religious Jewish holidays such as Rosh Hashanah and Passover. In normal years we would celebrate Chanukah together with family when it was convenient.

Of course, 2020 has been the year of adapting — doing Passover seders, bar and bat mitzvahs, and weekly services over Zoom. By this point, celebrating Chanukah virtually seems like no big deal.

For us, it’s nothing new. Since we don’t live near family, we have often celebrated Hanukkah by doing candle lighting blessings over FaceTime with grandparents, aunts and uncles, and cousins.

In normal years, we are grateful to have plenty of local friends to share the holiday with, but the pandemic means that we will have more virtual Hanukkah celebrations than ever.

Yes, some people give gifts on Hanukkah, but there is no one way to do it.

Presents were not part of the Hanukkah tradition until very recently, and mostly it is an American construct. Probably the biggest myth about Hanukkah is that everyone gets eight presents – one every night.

Every family has its own Hanukkah gift-giving traditions. When I was growing up, I got a gift just about every night, but they weren’t all from my parents – one night the gift would be from a sibling, the next an aunt and uncle, etc. Gift-giving is usually centered around children; adults may exchange gifts – but again, that depends on the family.

Traditionally, children receive money for Hanukkah, called “gelt.” Nowadays gelt is also given in the form of chocolate coins.

Some families do not give gifts at all.

Yep, it’s true — Hanukkah always starts on the 25th of the Hebrew month of Kislev, but because the Hebrew calendar is based on a lunar calendar, the “English” date changes every year.

Sometimes Chanukah isn’t even in December (think “Thanksgivukkah” a few years ago).

There is not one “true” English spelling of the holiday’s name.

The name is a Hebrew word, meaning dedication, that has been transliterated into English. That’s why you’ll see the various spellings – Chanukah/Hanukkah/Hanukah/Chanuka/Hanukka.

It is Associated Press newspaper style to spell it “Hanukkah,” which often is seen in the press; I prefer “Chanukah.”

In Hebrew, there’s only ONE way to spell it!

We get to eat foods fried in oil on Hanukkah — and they have zero calories.

So I made that last part up, but part of celebrating Chanukah customarily means eating latkes and other foods fried in oil, to remind us of the miracle of the oil lasting eight days.

And let me just say that latkes are not potato pancakes — they’re much better!

Jelly donuts (called sufganiyot) are very popular in Israel; my daughter is convinced that we just need to eat French fries and we’re good.

(Disclaimer: these are my opinions. Some might disagree.) Happy Hanukkah to all who celebrate!

Laura Weisskopf Bleill is the co-founder and editor of chambanamoms.com. You can reach her at laura@chambanamoms(dot)com.

Looking for all kinds of info for the 2020 holiday season in Champaign-Urbana?