You are here: Home / Education / Champaign Schools Lottery Mom: And the Winner Is …

Editor’s Note: This is the final installment of a four-part series about one Champaign parent’s experience with the Champaign Unit 4 Schools of Choice process. 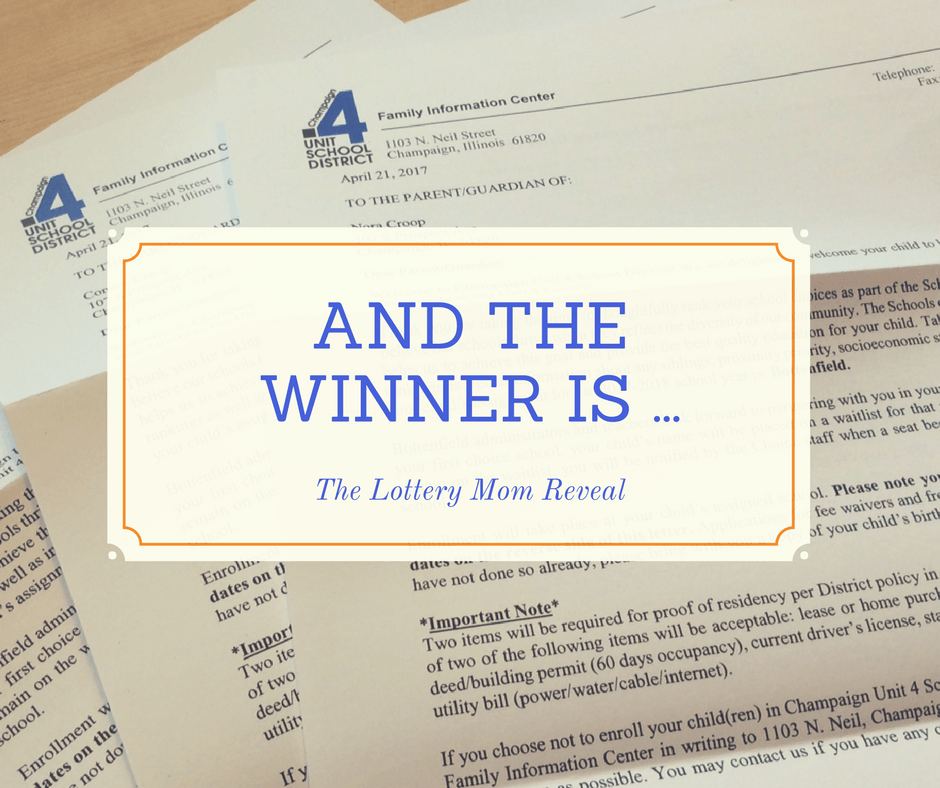 This past Saturday was a pretty big day for me. I was up at 6 a.m., out the door by 6:30, and running a marathon relay with friends to raise awareness for Rett Syndrome around 7:15. By 12:45 p.m., our team was toasting celebratory beers. (Hey, I never said we were fast.) And amid all the physical exhaustion and excitement, I frankly forgot that “The Letter” — or, in my case, three letters — might be waiting for me at home.

That is, until I logged on to Facebook to find gleeful posts from fellow parents who all seemed to have gotten their first-choice schools, along with an inbox full of private messages from curious friends (and, of course, my mother) who wanted to hear where the Crooplets were going.

Would we get our first pick at the popular, high-performing Bottenfield? Would we be waking up before dawn to drive to our second choice, Carrie Busey? Would we be facing an awkward two-strand split at South Side, our third runner up? I wouldn’t be home for a few more hours, but I was dying to know. And just then, I got a text from my husband, who sent a screenshot assist with the answer.

I’d had a nervous, pit-in-my-stomach feeling for most of the week, thanks in large part to the upcoming marathon. But I was also plenty worried about this whole school thing because I knew something had to go wrong. It was hard for me — a living, breathing human who’d done hours of thoughtful research — to believe that a soulless computer would simply spit out the school we wanted without a fight.

In short, I was prepared for a scuffle. But as it turns out, I had nothing to worry about: We’ve got three little Bottenfield Bees.

To say I’m relieved is an understatement because I’m also amazed — and incredibly impressed with Unit 4. Based on conversations I’d had with school officials, I fully expected to get three envelopes with three different school assignments that I’d have to manually sort out with the district after the fact. Instead, we got one envelope with three letters that assigned all of my kids to our No. 1 pick. The fact that they’d addressed it to my third-born triplet, Cameron, who’s used to being last, was icing on the cake, and he’s been sitting a little taller in his car seat ever since.

Maybe a human had intervened after all, or maybe that computer had a moment of compassion. Either way, I’m a happy camper, and I can’t wait for my rising kindergarteners to get started.

Thus, my Schools of Choice saga comes to an end, with a drama-free conclusion I didn’t see coming. The only thing left to do now is officially enroll the kids at Bottenfield next month and bring all three in for a kindergarten screening. (And maybe find out what a “kindergarten screening” actually is?) I’d also love to meet more incoming Bottenfielders — because right now we’re the only ones we know. So please reach out and say hello!