Do you remember watching the neighborhood trolley pass by King Friday’s castle? Or Mr. McFeely hurrying by with a Speedy Delivery? Mahomet resident Tim Lybarger recently co-authored a book chronicling the life and memories of Fred Rogers, star of the eponymous PBS children’s show. Find out how you can buy a signed or personalized copy below. Make sure to be on the lookout for a special chambanamoms giveaway where you can win one of two signed copies of the book in order to commemorate our 10th birthday in the Champaign-Urbana “neighborhood.”

When Tim Lybarger was finishing up his undergraduate degree in 1999, he ended up with an extra announcement for his graduation ceremony. On a whim, he decided to send the invitation to none other than Fred Rogers. Within a few days, he had received a personalized letter congratulating him on his accomplishments. It was at that time that Tim, who had grown up watching Mister Rogers and other iconic shows on PBS, realized that Fred Rogers was truly more than just a host of a popular children’s show.

As Lybarger became older and had children of his own, he came to appreciate the value and depth of the messages that Mister Rogers communicated to children and recognized that they applied to adults just as much as they did to their target audience. Lybarger now has three children and has worked as a counselor at Mahomet-Seymour High School for nearly twenty years. He stresses the importance of not only academic success, but also social-emotional learning as essential in helping young people develop into confident and caring adults in today’s world.

In 2008 Lybarger found himself looking online for information about a Mister Rogers record that he had when he was a child. To his surprise, he wasn’t able to find much at all. With such a lack of information available, he decided to undertake a large project and started a website, the Neighborhood Archive.

In its earliest form, the Neighborhood Archive was a simple blog with random posts about episode content and memorabilia. Very quickly, though, it became clear that there was a large audience looking for a resource similar to what Lybarger had in mind. The site now has approximately 3,000 pages and receives daily visits from “neighbors” around the world. 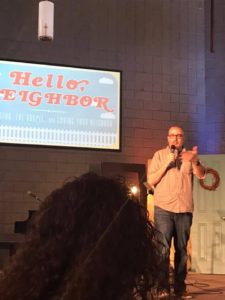 In the fall of 2018, Lybarger was asked to co-author the now-published book — alongside Jenna McGuiggan and Melissa Wagner — entitled Mister Rogers’ Neighborhood: A Visual History. The authors were able to talk with many of the cast and crew members from the Neighborhood and hear first-hand accounts of their time working with Fred Rogers. The authors also dug through years of photos, documents, and artifacts at the Fred Rogers Center in Latrobe, Pa. After reading over their manuscript, Tom Hanks, who plays Mister Rogers in the recently released movie “A Beautiful Day in the Neighborhood,” agreed to write the foreword.

In his roughly 20 years of studying and researching Fred Rogers, Lybarger said the timeless messages of self-value, peace, and kindness are the impressions that Mister Rogers wanted viewers to be left with. He urged readers to take time to sit back and appreciate the blessings in life, to help others, and to thank those who have helped us become the people we are today.

To get your copy of Mister Rogers’ Neighborhood: A Visual History, visit Amazon or your local book store. Signed and/or personalized copies of the book can be purchased at www.timlybarger.com/store and picked up locally with a quick drive to Mahomet.

Do you remember the day Tom Hanks showed up at Jarling’s Custard Cup? We do!