Chambanamoms.com is the top online resource for families in the Champaign-Urbana area.
Learn More | Advertise
You are here: Home / Blog / Mom To Mom / Tracking Santa with NORAD: One Champaign Mom Tells All

By Amy Weber
“Hello, NORAD tracks Santa, this is Amy. How may I help you?”

This year one of the gifts I received from my sister Maggie and my brother-in-law Dan was a volunteer shift on Christmas Eve.

I know, I know, you’re probably thinking, “A volunteer what???”

Now, I have done a lot of volunteer gigs over the past 28 years, starting with being a hospital candy striper when I was 16. This Christmas Maggie and Dan gave me the gift of volunteering at the NORAD Tracks Santa phone bank.

It was, by far, one of the most fun volunteer gigs I have ever done and a truly memorable Christmas gift. I can’t imagine anything that will top it, after all how often do we get to have such a direct hand in spreading joy purely for the sake of spreading joy to such a wide audience? I also had no idea that this little gem of an opportunity even existed and that it has been around for over 60 years.

According to the “NORAD Tracks Santa Operations Center playbook” (yes they actually have a playbook) this tradition began back in December 1955, due to an advertising misprint in a Sears ad. The advertisement invited children to call Santa on his personal phone line, but the phone number listed was that of the Continental Air Defense Command (CONAD) operations center in Colorado Springs, Colorado.

When children started calling to ask about Santa the Colonel on duty, Harry Shoup a.k.a. the Santa Colonel, chose not to turn them away. That night, he and his operators took those calls and dutifully reported the location of Santa to every single child that called that night.

Thus began a tradition that rolled over to the North American Aerospace Defense Command (NORAD) when it began in 1958. Today through satellite systems, high-powered radars and jet fighters, Canadians and Americans track Santa Claus as he makes his Yuletide journey around the world. 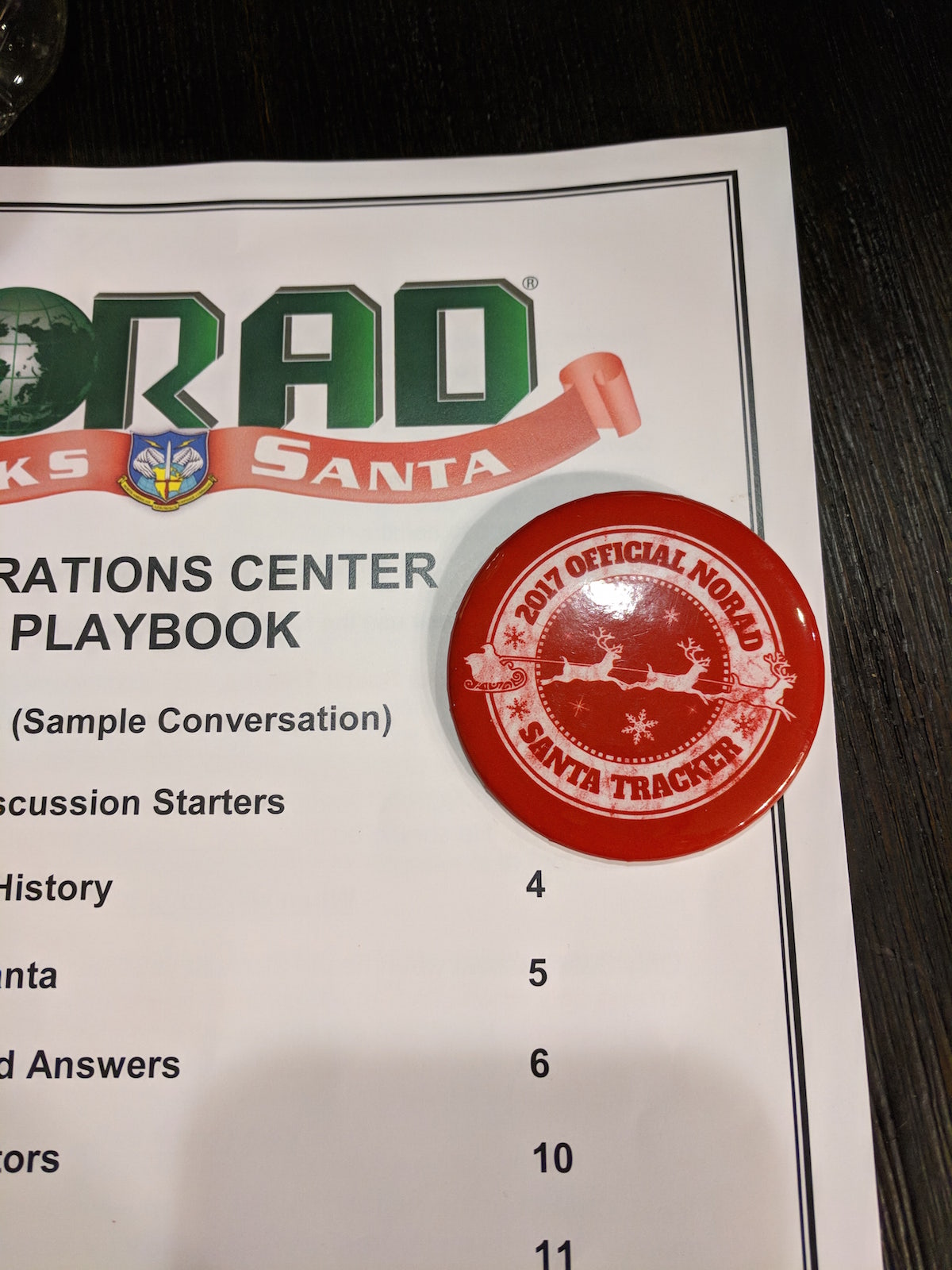 Hundreds of volunteers man telephone hotlines and computers to answer calls and emails from children (and adults) from around the world every December 24. Live updates are provided via the NORAD Tracks Santa web site (in eight languages) www.noradsanta.org, over telephone lines, and via email to keep curious children and their families informed about where Santa really is and if it’s time to get to bed.

This particular December 24, I helped man the phone bank from 8 to 10 pm, but it felt more like two minutes than two hours. When you walk into the control center there is a short briefing, then you receive the playbook, are taken to a phone, and do a “hot shift” whereby one volunteer moves out and you immediately start taking calls.

I think I took calls about every 30 seconds for two hours straight; consequently I have a whole new appreciation for people who work call lines. Here are some of my favorite calls:

Child: How is Santa’s sleigh powered?
Me (based on playbook): According to NORAD intelligence the fuel used is hay, oats, and carrots (for the reindeer), but there is still a lot about Santa we don’t know.
Child: Well I would think it is also powered by Christmas Cheer.

Child: Can Santa eat Cashews?
Me: Go ahead and put them out. If Santa can eat them, I’m sure he will. He might like the change from cookies.

Child: What is Santa’s real phone number?
Me: With all our intelligence here at NORAD we still haven’t been able to find that listing.

Child: Do we spy on the elves?
Me: No. Their operations are classified.

Child: How old is Santa?
Me: According to NORAD intelligence, Santa is at least 16 centuries old.

The most popular thing I said, according to parents was, “Santa is on his way, but he can’t come unless your sleeping. You’d better get ready to go to sleep now!”

It was hard to walk away from that phone and the kids who continued to call. What a joy to share a magic that extended so far beyond myself.

As I sit here reflecting on those two hours, I hope to carry the magic and joy of that night all through the coming year and beyond.

Amy Weber is a former librarian who volunteers her time all over town. She lives in Champaign with her husband, three kids, and two dogs.