Chambanamoms.com is the top online resource for families in the Champaign-Urbana area.
Learn More | Advertise
You are here: Home / Blog / A Guide to 24 Days of The Elf on the Shelf 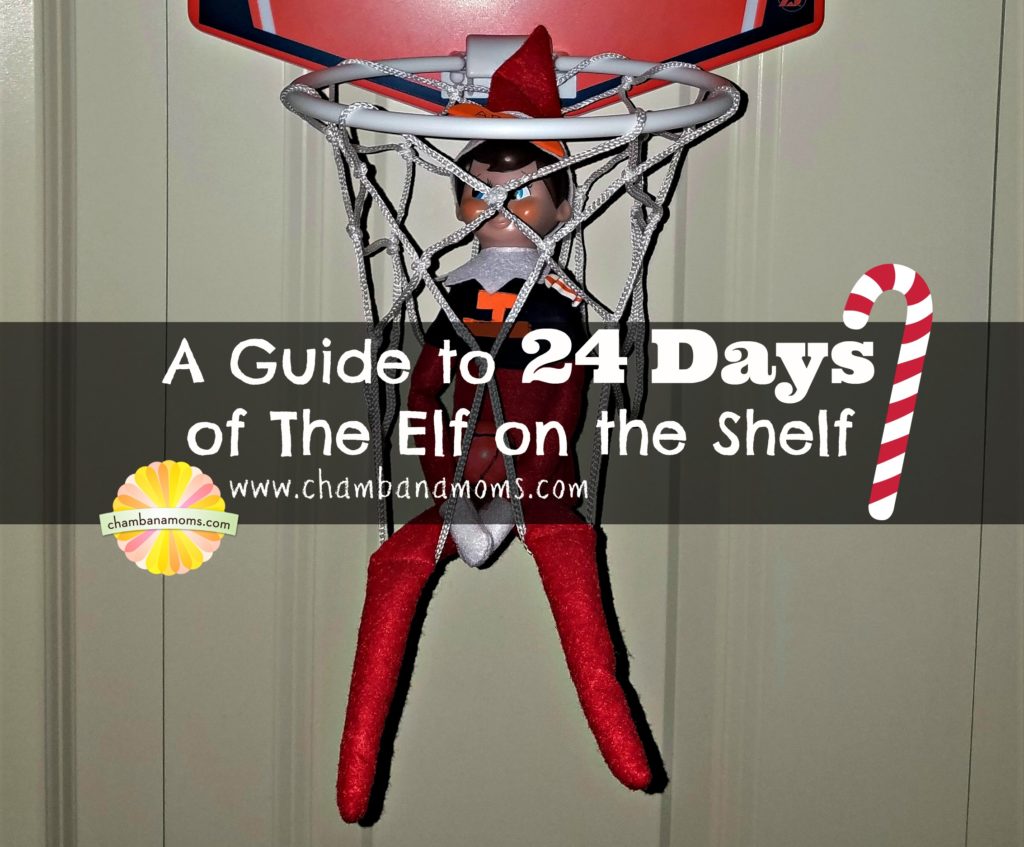 For us, it’s December 1. “Markel” comes out of the closet, so to speak.

It’s a love-hate relationship, me and the elf. Take Pinterest pressure to be bigger and better than the year—and night before. Add a splash of mom guilt. ‘Tis the (elf) season.

Many moms curse the elf. And on some especially tired nights, I do too. However, I love seeing the excitement and magic in my son’s eyes because of Markel’s antics.

In order to keep the magic alive, here are 24 simplish Elf on the Shelf ideas. Nothing was purchased to make these scenes come to life. We had everything in our home already. This makes putting these scenarios together the night before no problem. When your kiddos sleep, put the mischievous doll in one of the different scenes outlined. Magic.

Don’t forget—per the fable, do not let your little ones touch your elf. This could make the magic disappear. And, for goodness sake, use your elf as bribery. The entire concept (and associated book) revolves around being nice, not naughty, as the elf is reporting back to Santa.

December 1—Arrival. Simply having your elf appear is exciting enough. Put a doll suitcase/purse or backpack in your elf’s hand. Place by the door. Done.

December 2—After your elf’s travels he will be dirty. Fill up the bathroom sink with cotton balls, marshmallows or popcorn. “Submerge” your elf.

December 3—Your elf will also be hungry from traveling. Put the elf in the refrigerator with a cracked egg shell over the elf’s hat. Put a straw in some maple syrup so that it looks like your elf is drinking it. Make sure your kiddo(s) goes to the fridge by themselves in the morning. 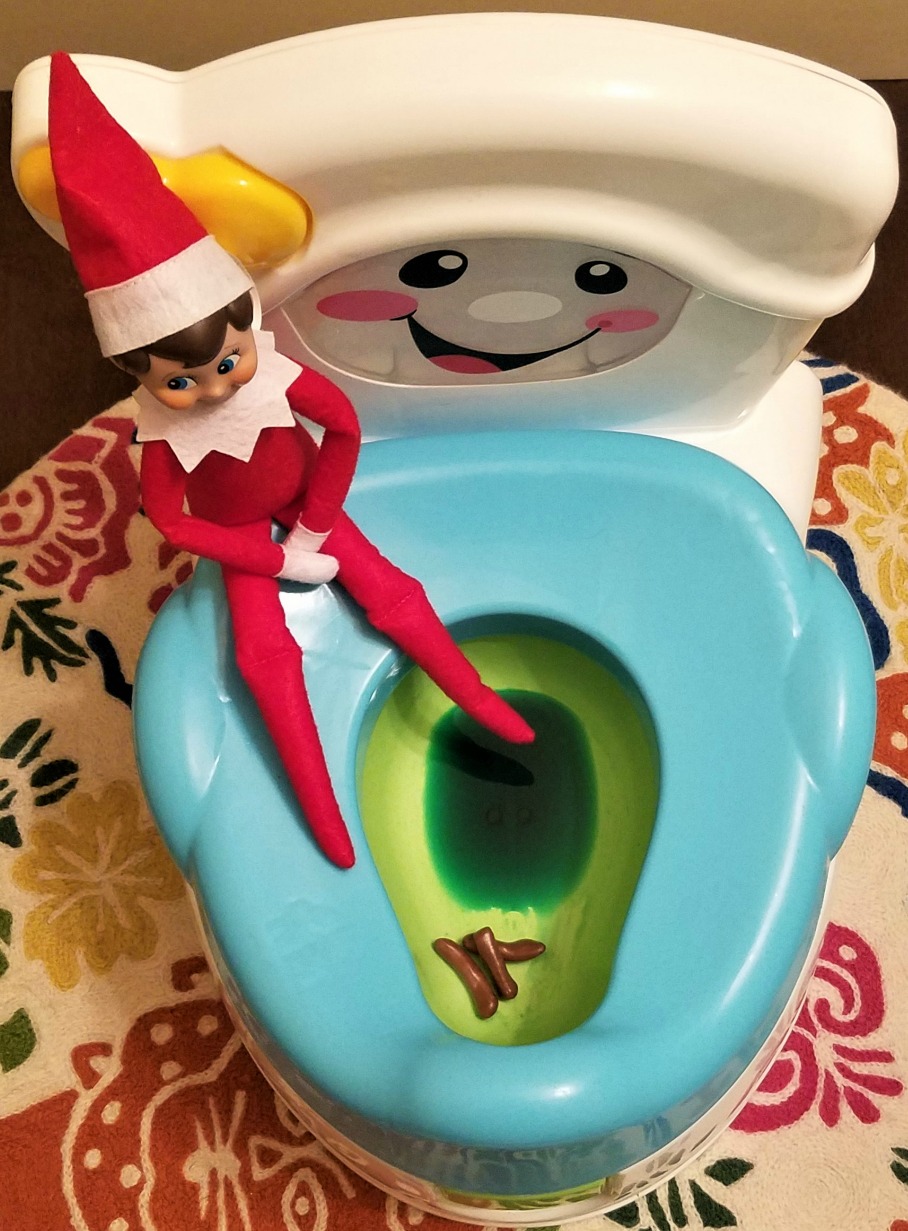 December 4—And after you eat—your elf is bound to poo. It’s highly likely your elf-interested kiddo is being potty trained, recently potty trained or just obsessed with “potty talk.” I put a Tootsie Roll (good purge after Halloween) in the toilet. Perch your elf on the toilet rim, toilet paper holder or toilet tank.

December 5—Where there’s poo, there’s pee. You can also dye the water with a few drops of yellow food coloring if you are more of a #1 person.

December 6—‘Tis the cold and flu season! Put your elf in an empty tissue box. Surround your elf with pain reliever bottles, syringes and wadded up tissues. Put your elf on a nightstand.

December 7—Pamper your elf. I put some green face mask on my (oops, my son’s) elf. If you don’t have that, use lotion. Cut little cucumber slices out of green paper. And make a headband or turban out of a rubberband/toilet paper. Put your elf in the bathroom. 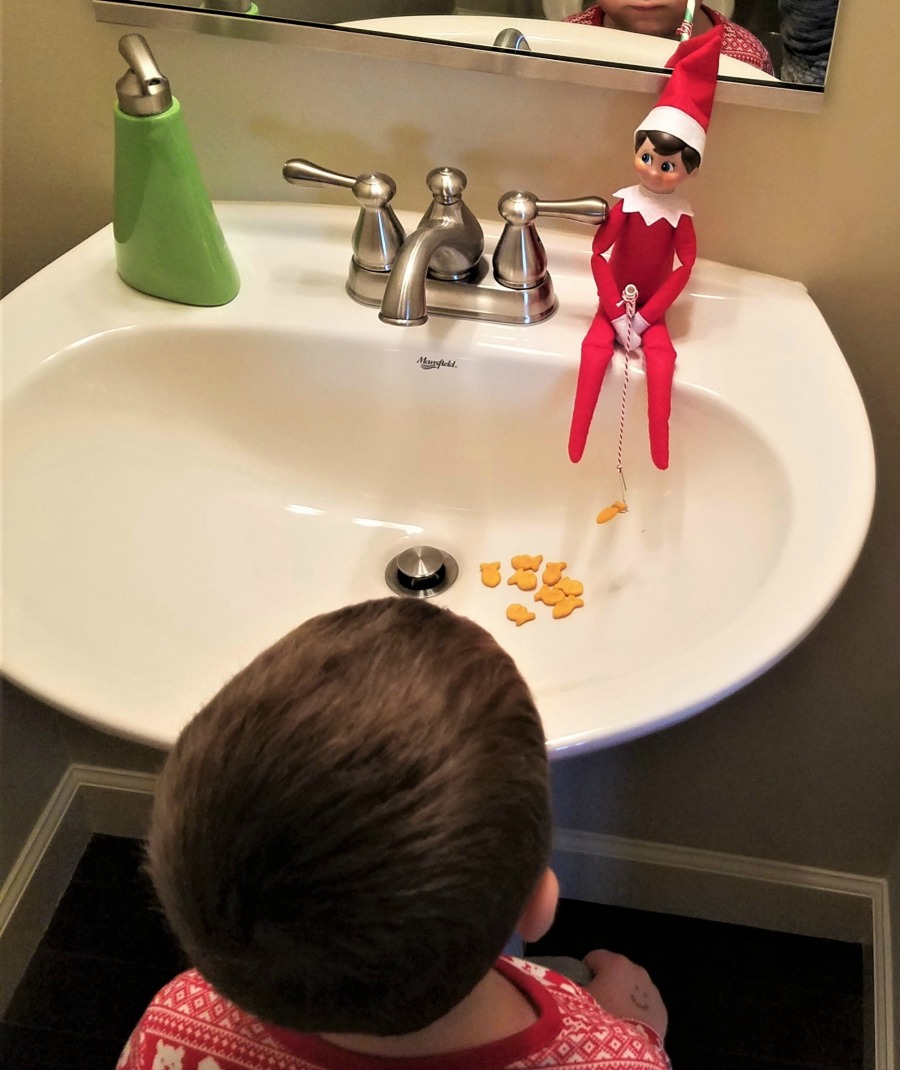 Fishing. Use a straw with string tied to the end. Tie a paperclip to the end of the string. Sprinkle Goldfish crackers into the sink. Perch the elf onto the rim of the bathroom sink. The basin becomes your pool. You can get fancy using dyed water and Swedish Fish candies, too.

December 9—Sports. Using clothes from other figurines, I made Illini apparel. An orange bouncy ball became the basketball. I hung the elf in his little basketball net.

December 10—Using brown clay, I made a football. Dress your elf in the same Illini uniform. Place the elf on a football field made with construction paper and chalk.

December 11—Baking. Make a little cookie tray with tin foil. Line with rows of a dozen round candies. Go the extra mile by making felt oven mitts. Place in the kitchen.

December 12—Camping. Using a candle as your “fire,” situate your elf with a little rod like a toothpick stuck with little marshmallows. Place outside a visible window.

December 13—Gardening. Sit your elf in any plant. Using crushed cookies as “dirt,” you can make a scene with the dirt and flowers from paper, beads or toys.

December 14—Encircle little Lego people, toy soldiers or any toy people around your elf. Tape your elf to your wall. Put some of the tape over your elf’s mouth. OR tie him up to a chair leg. Resemble a hostage situation. OR tie your elf to a toy train track.

December 15—Hang your elf upside down on a horizontal peppermint stick. Hang from somewhere—like the elf is on a trapeze.

December 16—Take clothes from a superhero action figure or a doll. Mimic playing dress up.

December 17—Stick your elf in three stacked toilet paper rolls. Add construction paper buttons, eyes and a carrot nose. Add a disguised note, “Do you want to build a snowman?” Great for a snowy morning. Deviate from the schedule, if needed.

December 18—Stuff your elf in a mason jar or vase. Include a “HELP” note.

December 20—Using a dry erase marker, mark up a family picture with mustaches on the faces. Place the elf beside the picture. Be sure to include the marker in your elf’s hand.

December 21—Make a small snow angel shape on the ground in flour. Also, great for a snowy morning.

December 22—Hide your elf in the tree.

December 23—Wrap your elf in wrapping paper. Place your elf under your tree. 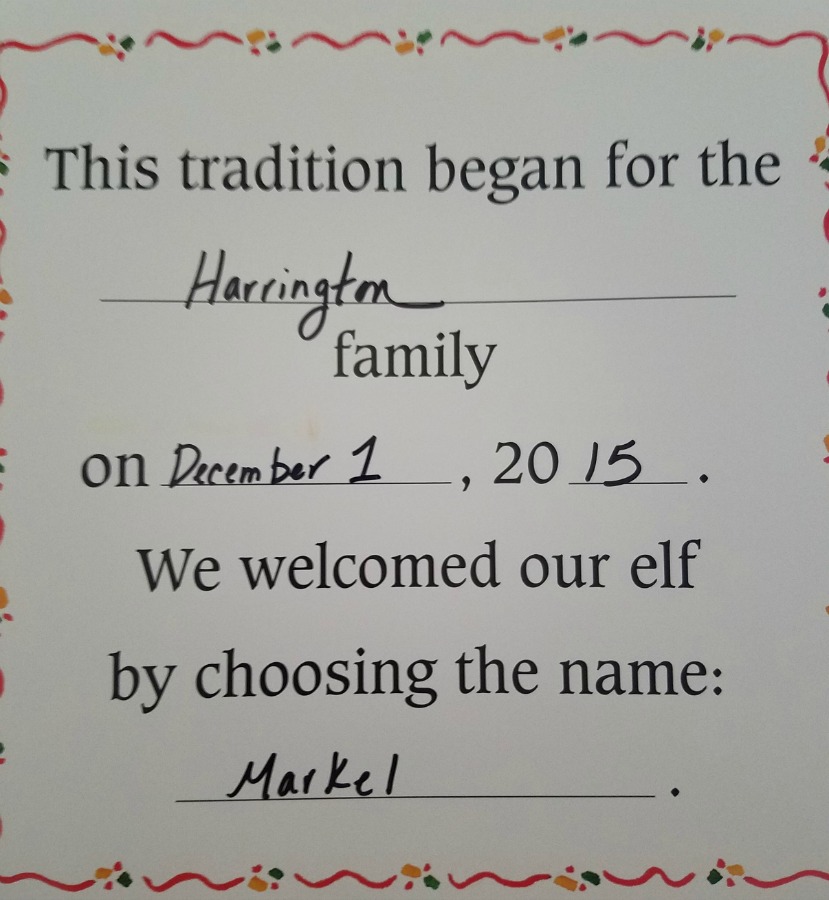 If my son had a particularly “naughty” day, I have left him just a note that the elf wouldn’t return until his behavior improved. Feel free to use in extreme cases.

Per the elf, “THE NIGHT BEFORE Christmas my job’s at an end. The rest of the year with Santa I’ll spend. So blow me a kiss and bid me farewell. I’ll fly away when I hear Santa’s bell. Of course I will miss you, but wait ‘til next year. When the holidays come I’ll again reappear.”