You are here: Home / Blog / Champaign Schools Kindergarten Lottery Mom: The Results Are In

The results are in! If you had asked me a week ago where we would be going in the fall, I would have said, “It’s complicated.” But things have changed, and I think it is safe to say that we are happy and settled. Our daughter will be a Bottenfield Bee. 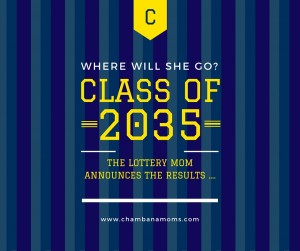 Bottenfield is one of our two proximity schools, and we ranked it first. Originally, we decided to rank South Side first (not a proximity school for us), but after watching the numbers, we decided to make sure that we listed a proximity school first. It’s a good thing we did, because when I called the Family Information Center after receiving our placement letter (maybe five minutes after I opened it), asking to be placed on the wait list for South Side, the wait list was already 10 families long. Had we stuck with our original rankings, we definitely would not have been placed in one of our top choice schools. Though we are still on the wait list for South Side, as the 11th family, I would say it’s very unlikely that we would get a call before school starts.  Though I was a little bummed at first, because there was so much we loved about South Side, I also felt pretty silly. Did you know that Bottenfield had the highest number of families who ranked it first this year? Obviously there is a reason so many families fell in love with it. And even with a proximity priority, we were probably pretty lucky to have gotten a seat. And really, it is SO close, and definitely on the way to work for both parents. Mary Ella could even walk to school – though maybe not for a couple of years. I’m not quite ready for that! Am I talking myself into liking it more because we really don’t have much of a choice? Maybe, but after tonight I think we’re genuinely at peace with our placement.

Tonight was Bottenfield’s kindergarten screening night, and I would say it went very well. The atmosphere was warm and welcoming, and the faculty, staff, and parent volunteers were all very enthusiastic. There were things I expected, and then things I didn’t expect. After an initial check in at the front door and welcome in the library, the children were asked to join teachers in a classroom, and parents stayed in the library. I don’t know why this surprised me, but it did. Mary Ella marched confidently off with the teacher, and I felt a little weepy. How did she get to be such a big independent girl? I felt like such a cliché, and it isn’t even the first day of school! While the kids went off to a classroom to draw pictures, read stories, and work with teachers individually for screenings, parents had informational presentations from the PTA, the school’s principal, and one of the kindergarten teachers. The faculty and administration’s presentations were very informative, giving a great general overview of what to expect from kindergarten, and answering any parent questions. They also went through the great bag of kindergarten prep materials given to each child. Mary Ella is already practicing writing with her cool new kindergarten pencil and writing pad. Also, as a person who likes to plan WAY ahead, how awesome is it to have a school supply list this early?

Bottenfield’s PTA seems like a great organization, especially after visiting (creeping on?) their Facebook page. Pro-tip: This is one of the ways I evaluated schools during the selection process. You can find out a lot of great information about a school by visiting the PTA Facebook page. For example: How many other parents do I know? What kinds of school community events are offered? What does the school seem to value? I don’t feel quite so voyeuristic now that the PTA representatives have officially invited incoming kindergarten families to join right away. They are also planning a couple of summer play dates, for incoming families to meet one another, and for kids from kindy and other grades to play together. I think this is an excellent idea, and we’ll definitely be taking advantage of it.

Mary Ella did very well on her screening, which was not surprising, since in her words, she is a “learning machine.” The best part of the night, however, was when she told me this before we left: “Mommy, I really think this is the best kindergarten for me. I’m so excited that this is going to be my school!” Me too, kiddo. Me, too.

Thanks for following along with the Blakeman family as we navigated this process for the first time. I hope other incoming kindergarten families have found the commiseration helpful! While there were definitely parts of this process I found to be incredibly frustrating, in the end it seems like the system worked the way it was supposed to (at least in our case). I know this is just one family’s experience, though. How have things worked out for you and your family?

Katie Blakeman is a proud townie, married to Champaign City Planner T.J. Blakeman. Katie and T.J. consider themselves the Champaign welcome wagon, telling everyone they know how awesome it is to live in Champaign. Mother to Mary Ella and Juliana, Katie also serves as the Champaign County Circuit Clerk.