Chambanamoms.com is the top online resource for families in the Champaign-Urbana area.
Learn More | Advertise
You are here: Home / Blog / Mom to Mom: Enlisting in Potty Training Boot Camp aka the Three-Day Method

I’m not the type of mom who likes to stick around home and play games on the floor. I’d much rather go to the pool, the park or an indoor play area. If you knew my son, you’d understand my affection for big, open spaces to play in. He has energy to burn. So, when I decided to adopt the premise of the three-day potty training method, I knew it would be exhausting and challenging on all levels. Here’s the kicker — you must stay at home for three days straight. But, as one friend put it, “I’d rather go through three-hard days than prolong the pain for weeks.” True that! I’m in. 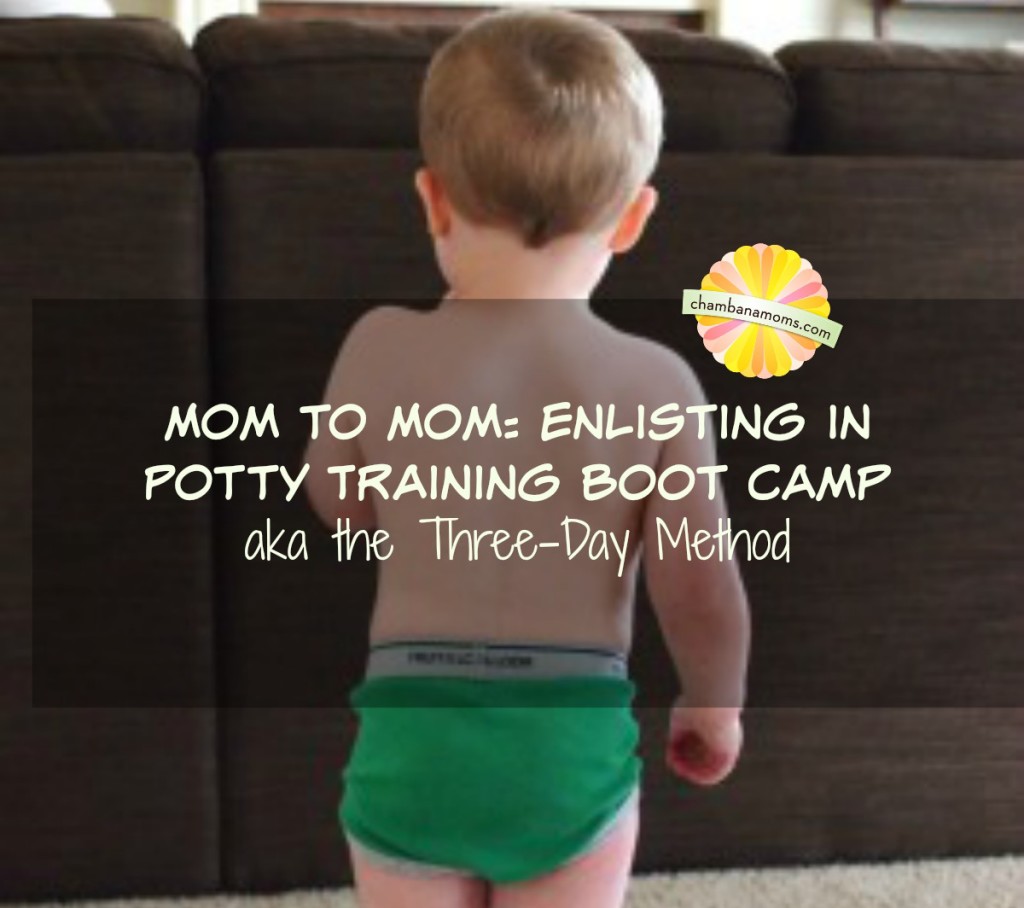 For a few weeks leading up to the long weekend of training, we talked about the potty, introduced pottying terms and made a big deal of how gross dirty diapers were. I got stickers, charts, candy, prizes, a seat and stool. Oh, and dozens of the most adorable little boy underwear. We were ready to roll.

On the first morning of the 72-hour boot camp, my son and I threw the last remaining diapers away. He put on “big boy” underwear and a t-shirt. Go time. The method I had chosen to adopt was successfully used by many women in my neighborhood and a best friend of mine. I became intrigued when she told me about her positive experience with the three-day method.

There are variations of the three-day method or “quick training” all over the Internet. The premise for each variation is mostly the same.

Since the weather allows my son to be comfortable in just underwear, there are no school schedules to contend with and before there are any other children in our family picture, I wanted to potty train this summer.

Those first few hours of the boot camp were absolutely insane. I could not clean up one puddle before another one would occur. I’d try to give him an M&M and put a sticker on the chart, and another stream would come running down his legs midcharting!

At one point there were multiple puddles on the floor, one on the counter and one on the carpet. It was mayhem. As soon as I’d catch the dribble, I’d pick him up and run to the toilet to finish. We would both scream in excitement when pee went in the toilet, then I’d give him a M&M. Any pee or poo that went in the toilet was rewarded. One M&M for a pee, two for a poo. And let me tell you, I ate more M&Ms than I care to admit. To say I “stress ate” that weekend was an understatement. For every one he ate, I ate five.

Eventually I started reading his cues and knew what to look for. Less and less pee went on the floor and more and more went in the toilet. All the while I kept saying over and over and over and over, “Tell mommy when you have to potty.” By the end of day one he would respond “potty” when I told him to tell me. He had a few accidents but nothing like the morning of day one. That night I stopped liquids well before bed and made sure not to put him down until he had peed. I even woke him again to pee before I went to bed.

He woke up wet which I expected. Throughout the morning of day two he was going into the bathroom himself to show me he had to go and telling me “pee” or “poo” without any prompts. And let me tell you, when he had his first poo in the toilet, I felt absolutely euphoric. I don’t know if his college graduation or wedding ceremony will bring me as much joy as that poo did. I really felt like he was getting it—like we were on the right track. However, on day two, he did still have some accidents.

You had to pay attention at ALL times in order to catch the accident either before or at the very beginning. By the end of day two I was laughing to my husband about the insanity of the day—the process. Midway through the laughter I just started crying because I was so exhausted and discouraged by the occasional accident. My son was doing great, but my confidence in the process was waning.

That night I woke him up before I went to bed to potty and again at 2:30 a.m. when I got up to go myself. That morning he woke up dry which was a big win and kept me going for day three.

On day three I kept waiting for him to just “get it.” I wanted him to grab a newspaper, march into the bathroom, plop down and do his business. Unfortunately, the accidents sporadically continued. I’d ask him over and over to tell me if he had to go potty, then we’d be doing something, he’d look down and pee. Every time I felt a little stab of defeat.

On our day back into the “real world” I was armed with changes of clothes and dry underwear. He went to the bathroom multiple times before we left the house. We went to the gym and went to the bathroom as soon as we got there. During my 40-minute workout, he had two accidents. On the way home, he had another accident in the car. WTH? Three days. That’s all it’s supposed to take!

I never heard the “click” or felt the magic of this “magic bullet” my fellow trainers had mentioned. What I did hear were the loud and repetitive voices in my head:

Oh, and there’s the other voices: family, friends and other moms. Everyone knows the right way to potty train.

Some said to keep it up—he’ll get it!

He’s made leaps and bounds since day one, but I just feel like we are stalled out right now. I thought he would be accident free after the intensive training.

I have to adjust my expectations. It’s not magic. I still need to be consistent in my actions and language pertaining to training, and we will still have accidents. I can say this, if we do end up trying something different, back in diapers or in Pull-Ups or baby maxi pads or whatever absorbent miracle we need after all this, it won’t be for lack of trying. We have given it our all. And even if it’s not a perfect method, we now have a good foundation and understanding of potty training.

OK, let me have it. Has anyone had success with intensive “quick potty training?” Comment below if you want to share your training success or failures.

Emily Harrington is a Chambana townie that left her 8 a.m. to 5 p.m. job to be a 24/7 mom to a dreamy son. Still interested in writing, Emily uses some of naptime to practice her passion and keep her mind right. Emily is a happy wife with a happy life because she fell for a fellow townie. Oh, and let’s not forget her other son, a degenerate canine named Heppenheimer.