Chambanamoms.com is the top online resource for families in the Champaign-Urbana area.
Learn More | Advertise
You are here: Home / Holidays / 5 Things To Know About Passover (and How to Celebrate in Champaign-Urbana)

PASSOVER IN CHAMPAIGN-URBANA: Where to Shop and Where to Find a Seder … even in the time of Covid-19

Passover jokes are typically corny. This year, as we approach Passover in a historic pandemic, the jokes are keeping us laughing instead of crying. On of my favorites: “So does this mean we aren’t letting Elijah in for Passover?” (This year – stay six feet away.)

Below we’ve put together a very short “cheat sheet” about Passover — five things you should know about this very significant holiday on the Jewish calendar –and how to celebrate in Champaign-Urbana: 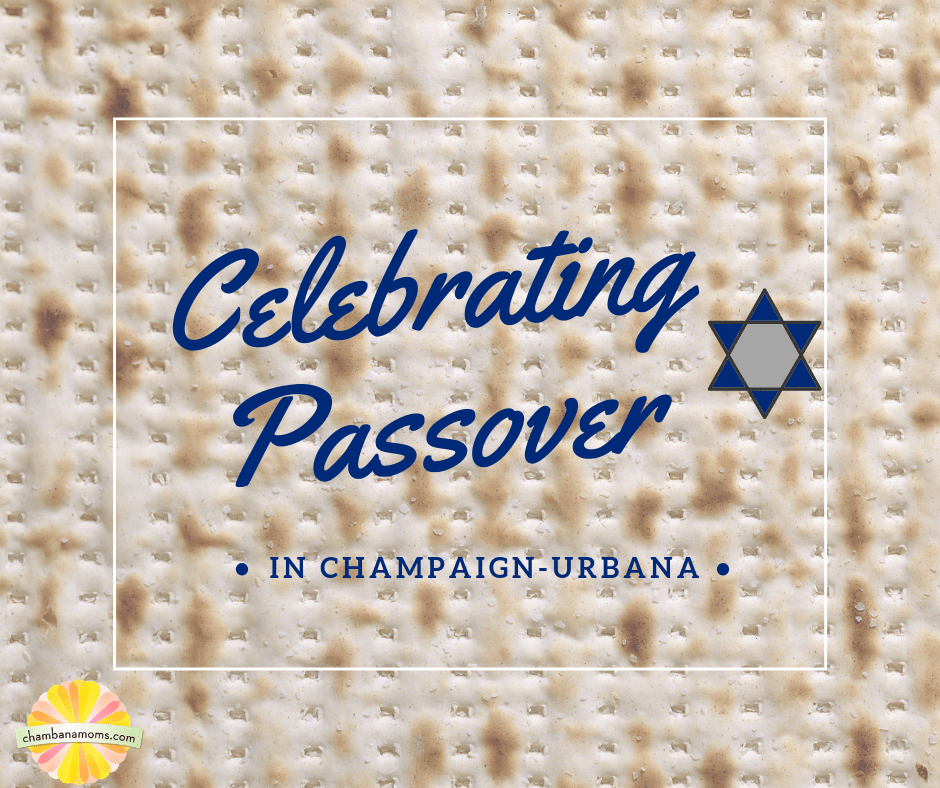 There’s so much to consider when preparing for the holiday: where to buy Passover food in Champaign-Urbana? How do I find ritual items, such as a seder plate, to put on my Passover seder table? And my favorite – where to go for a seder when you don’t want to make one? We’re here to help! Of course, this year our answers are a bit different than a typical year.

Where to buy Passover seder supplies:

Typically, we send people to the Sinai Temple Passover Showcase to buy items; unfortunately that has been cancelled this year. If in need of supplies, check online and find resources for seder plates and other essential items.

Thank goodness grocery stores are still open. (We are VERY grateful for all those working to keep those stores going).

Some locals might go to Jewish neighborhoods in the Chicago area to buy Passover goods, but thankfully, there are options in Champaign-Urbana to get the basics. Many grocery stores in Champaign-Urbana will have the bare necessities for Passover, such as kosher-for-Passover matzah, gefilte fish, and perhaps some macaroons.

The most comprehensive selection of Passover food in the area is at Schnuck’s in Champaign, although many have found it somewhat disappointing this year. Meijer in Champaign in years past has had a decent selection.

Other stores that have at least some Passover food: the County Market on Springfield just north of campus; the Meijer in Urbana; Schnucks in Savoy; and Harvest Market. I have not seen any Passover items at ALDI (I’ve only been to Savoy store).

Where to attend a seder in Champaign-Urbana (when you don’t want to make —  or do — the dishes):

Most years, communal seders happen in multiple Champaign locations. However, this year will be different.
In the era of social distancing, Passover too will adapt. The Israeli rabbinate has officially given its blessing to Jews holding seders over Zoom or other forms of videoconferencing communication.

No, I am not making that up. Here is a good article about holding a seder virtually. It may be possible that there will be communal virtual seders or other virtual educational events facilitated by local Champaign-Urbana Jewish organizations; stay tuned for more info.

.Unfortunately, there will be no seders or meals served at Illini Hillel’s Cohen Center this Passover.

Chabad at University of Illinois hopes to empower everyone to make their own Seder. It has partnered with a Chicago caterer to create a Seder in a Box, a to-go seder. Orders can be picked up in Champaign; click HERE for more info (orders must be submitted by March 31).

Does your family celebrate Easter? We’re working on shifting our Easter information, so stay tuned. One place to hunt for eggs – the Champaign County Forest Preserves.

Do you have questions or comments about Passover, seders, or anything else? Let us know. Contact Laura: (laura@chambanamoms.com).