You are here: Home / Arts / Marching Illini: Where to See the Best Band in the Land

Last Champaign-Urbana, we have a confession to make: we are OBSESSED with the Marching Illini. We’re proud to say that we might even be considered Marching Illini groupies.

We know that one of the best places to see the University of Illinois at Urbana-Champaign marching band in action is at a football game, during the traditional pre-game, halftime and post-game performances. But we’re here to tell you that the Marching Illini transcend the Memorial Stadium football field.

(For more on how to enjoy Illini athletics, see 10 Reasons Families Win with Illini Sports ) 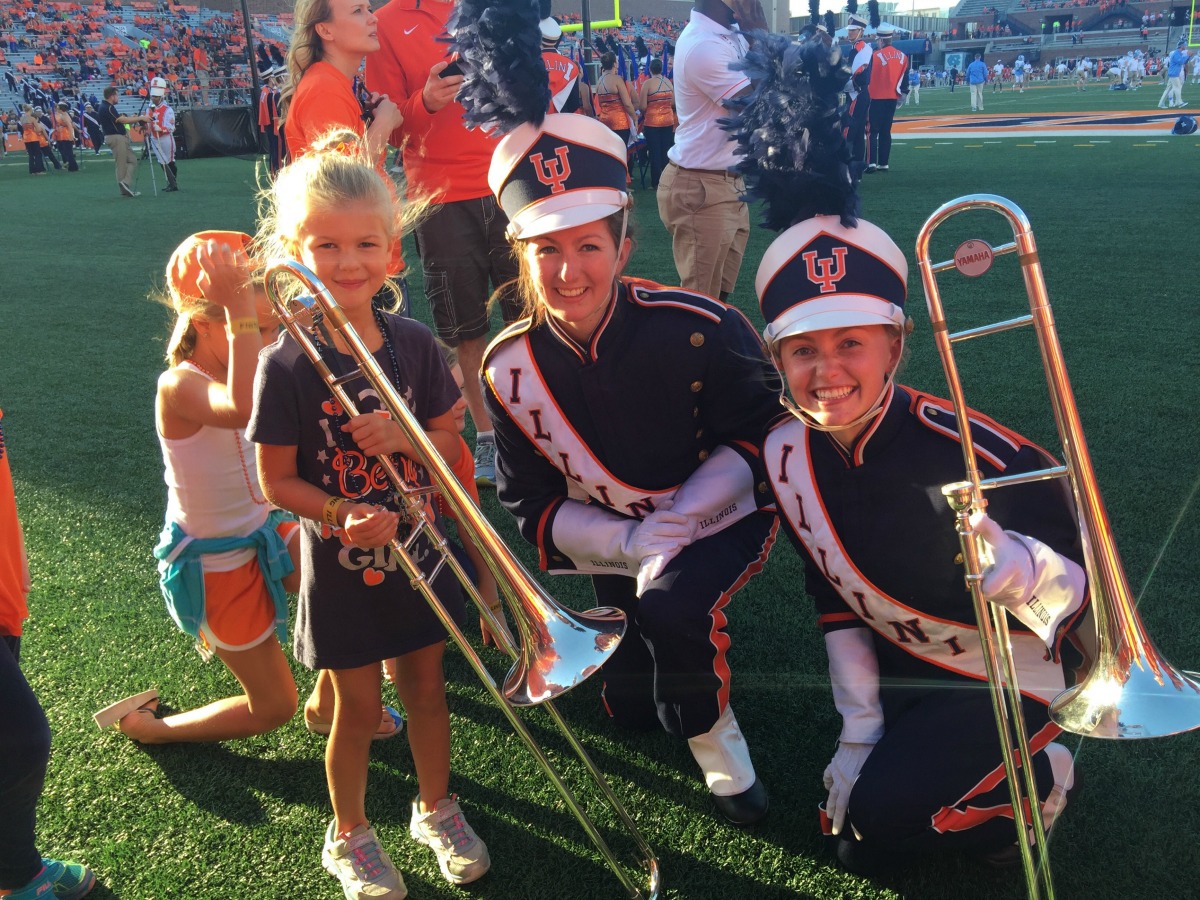 Here are ways to see the Marching Illini perform, as it celebrates its 151st season this year:

2) The Marching Illini host an annual marching band championship, with high school bands from all over the state.
This year to be held on October 26, 2019. Have the marching band day of your life! It’s a full day of performances,, starting at 8:30 a.m. and finishing up around 9:30 p.m. with two exhibitions by the MI. Admission is charged, but kids 5 and under are free. This year, St. Joseph-Ogden High School, Champaign Central, and Mahomet-Seymour are among the local bands competing.

3) You don’t have to go into the game to see the Marching Illini on game day. Don’t have tickets? Can’t stay for the game? Just head to Grange Grove, the tailgate area right in front of Memorial Stadium, about 2.5 hours before game time, for a short concert (for an 11 am game, typically 8:30 am). If you don’t want to go to Grange Grove, about 45 minutes before game time, the band parades out of the Armory as it marches to Memorial Stadium. Keep an eye on the Marching Illini Facebook page where the game day schedule is typically posted.

4) If you go to the game to see the Marching Illini, be prepared to go early and stay late. Everyone knows that the Marching Illini perform at halftime. But they also play on the field before the game (pregame performance) and do a short postgame. After the game, they march back to the Education Building where they conclude the day with a musical performance that highlights the major pieces of that game’s show. (When there’s a night game, that concert sometimes gets cancelled). Again, check the game day schedule.

5) Don’t like to be outdoors? The Marching Illini’s annual performance at Krannert Center for the Performing Arts means no shivering outside or waiting in the rain. The Best Band in the Land heads indoors for this concert featuring its signature tunes, highlights of the season, and some exciting extras. This year, the show is Sunday, November 3. Tickets: $10 for adults, $8 for kids. (There is also a Homecoming concert at Krannert for all of the Illinois bands, and the MI play part of the program).

BONUS: The Marching Illini also march in the University of Illinois at Urbana-Champaign HOMECOMING PARADE.

Did we miss anything? Email us – editor@chambanamoms.com.