You are here: Home / Arts / #ChambanaWithoutKids: The Top 10 Grownup Things to Do in Champaign-Urbana in February Sponsored by Champaign County Area Restaurant Week

Thanks to Champaign County Area Restaurant Week for sponsoring our February #ChambanaWithoutKids article. The third annual Champaign County Area Restaurant Week is back and tastier than ever. Plan a date night or a girls night out during this nine-day celebration of all things food Jan. 25-Feb. 2. Restaurants will offer prix-fixe menus or specials for lunch and dinner so you can discover your new favorite dish or date night spot! 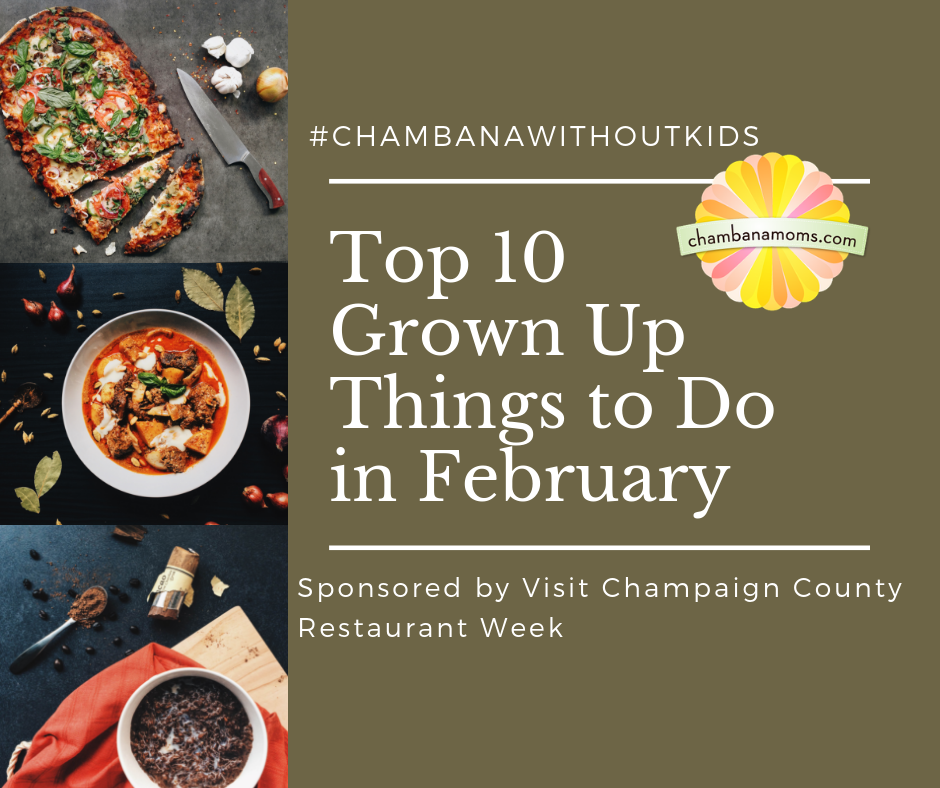 Eating Out — Given all of the special menus being offered during Restaurant Week, this seems like a no-brainer. Now’s the time to get out and try something new. Check out the list of participating restaurants.

Owl Prowl — More owls can be found in Champaign County in the winter months, and it’s also when some species breed. If you want to see an owl in the wild, here’s a great chance. For ages 15 and up at Homer Lake Interpretive Center on Feb. 20. Must register by Feb. 19.

CU’s Got Talent — It’s a talent show that, most important, serves as a fundraiser for groups that don’t have the ability to host such an event on their own. Eight performers are featured, and the event will benefit organizations like the Daily Bread Soup Kitchen. Feb. 2 at the Virginia Theatre.

The Big Bang Murder Mystery Dinner — It’s an evening of murder, mystery, dinner and wine at the Sleepy Creek Vineyards on Feb. 9. Presented by Champaign-Urbana Theatre Company, this audience-interactive murder mystery compels you to find the murderer. Tickets are $40.

Come Blow Your Horn — Parkland’s 28th Annual Student Production will feature a student director and all-student staff. Come Blow Your Horn is the story of Alan and Buddy Baker, two brothers who could not be more different. The comedy launched the career of famous playwright Neil Simon. Performing Feb. 7-17 at Parkland’s Second Stage Theatre. Tickets are $10.

Illini Hockey — If you’ve never been to an Illini hockey game, it is must-see entertainment. In addition to some fast-paced hockey, the atmosphere created by UI students is something special. The team plays at the UI Ice Arena on Feb. 1-2 (against Minot State University), 8-9 (against Ohio University) 22-23 (Iowa State). Here’s ticket info ($10 for general public).

Hit the Wall — The Krannert Center website describes the play thusly: “The Stonewall Riots, started during a police raid on the Stonewall Inn in New York City in June 1969, are mythologized as the beginning of the contemporary gay rights movement. Playwright Ike Holter reimagines that night, bringing desire and frustration to sweaty, messy, sexy life. Featuring a live band and a multivoiced narrative, Hit the Wall remembers the past but points bravely to the future.” Shows run Jan. 31 to Feb. 10 but be aware: There is a waiting list for every show.

28th Annual Great Cover Up — The Feb. 10-18 event brings more than 30 local bands into the spotlight. What’s more, the proceeds go to three worthy causes, including the Urbana Middle School bands program. All five shows this year will be at The City Center in Champaign. Tickets range from $10-$50.

The Women of Lockerbie at the Station Theatre — Deborah Brevoort based her 2003 poetic drama The Women of Lockerbie on the aftermath of the 1988 terrorist attack that resulted in the explosion of Pan Am Flight 103 over Lockerbie, Scotland. In the play, which was written with the structure of a Greek tragedy, an American woman whose son died in the bombing discovers a group of Scottish women who are trying to collect the victims’ clothing, which had been scattered across Lockerbie. But they find resistance from a U.S. official. The only remaining performance in February is Feb. 2.