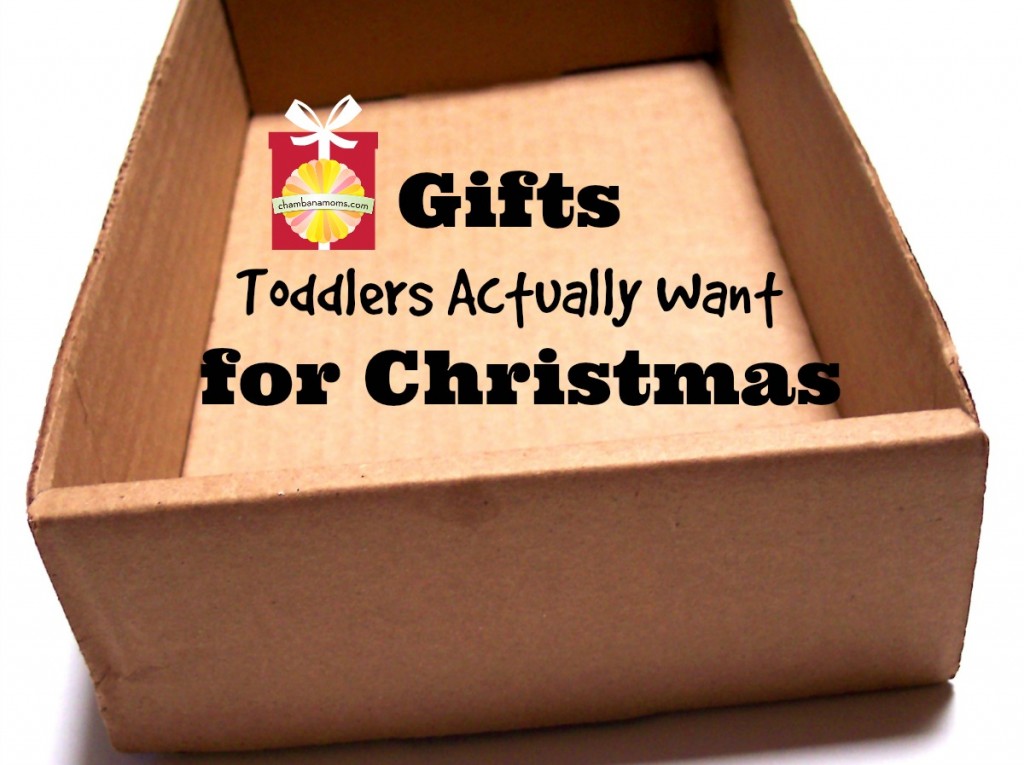 As parents, we fight Black Friday and Christmas Eve crowds to obtain the latest, most cutting edge, trendy, rainbow-loom, tickle-me, robotic excuses to live vicariously through our children. Then Christmas morning, our toddler burrows into the packages like a manic gopher, chokes on tissue paper, insists on opening everyone else’s packages, and then passes out on the floor surrounded by the discarded boxes of the hottest new toys on the market. Mom and Dad spend the rest of the day guzzling their coffee, applying decals, and nursing their empty wallets. Eventually the kids end up playing with the toys they found in the box we were planning to donate to Goodwill and everyone wonders where they went wrong.

It would be so much easier if your toddler could explain exactly what he wants for Christmas so that you could get him a gift that would entertain him for more than three minutes, or at least as long as it takes to cook the turkey in peace! Unfortunately they don’t often know what they want … but I do.

After three kids, five Christmases as a parent, and countless hours spent playing alone with expensive train tracks and fancy e-readers, I’ve compiled a master list of what your toddler really wants for Christmas:

A photo of themselves — My kids will stare at the image of their face on my phone until their eyes bleed. I can barely take a photo of anyone anymore before my children are on me like mice on cheese begging to see themselves. They might be budding narcissists, but at least it entertains them long enough for me to use the bathroom.

Cardboard boxes — Recently my children nearly came to blows over the large box which contained our new fake Christmas tree. I asked who would like to put the star on the top, expecting a show of excited, awestruck hands, but instead was greeted with shrill screams and a rousing chorus of “BUT I WAS IN THE BOX FIRST!” Next year we’ll just decorate the box.

Tupperware —  I have approximately 4,132 pieces of mismatched, microwave-stained, plastic food containers. Anytime my kids are circling round my feet like vultures while I’m trying to cook, I just open the cabinet I like to call the tupperware graveyard and it’s like I’ve opened the gates to Narnia. They use them as drums, places to hoard all the treasures they don’t want their brother to steal, vehicles, and sometimes even hats. They won’t even mind the orange food rings melted into the sides as long as you tell them it’s a sports stripe like the ones on a Camaro.

Wrapping paper — I’ve considered wrapping up empty boxes for my toddlers because by the time the paper is shredded into a zillion tiny pieces, half of it ingested, and the rest littered around the house like confetti; they are usually too emotionally exhausted to enjoy the present inside anyway. Might as well cut the pretense.

Keys — Before I had kids I assumed the fascination with keys ended with drooling babies and didn’t start up again until they earned their driver’s permit. However, now that I have three kids I realize my mistake. Keys are extremely important and valuable: we can’t leave the house without them. So if a toddler wants to get Mommy’s attention or doesn’t feel like shopping for new underwear and potty frogs, then stealing the car keys is a very effective bargaining tool. They also make great tinkling sounds when flushed down the toilet.

Toilet paper — Speaking of flushing things down the toilet, kids love toilet paper. My children build towers out of the cardboard rolls, make costumes from the streams of paper, and splash in the puddles formed by the blocked toilet after they attempt to flush said costumes. In fact, the only activity my toddler refuses to do with toilet paper is wipe his own butt.

Remote Controls — We have two televisions and four remote controls in our house and I still have to control my smart TV from an app on my phone because my kids think hiding the remote is better than Mickey Mouse Clubhouse, Thomas the Train, and Dinosaur Train combined. One time I found the remote hidden in a box of baby clothes that had been in the garage since before the toddler could walk. I try not to think too hard about these things.

Mom’s make up — I have two rough and tumble, car-loving, dirt-wearing, booger-eating boys and yet they will spend hours playing with the ancient lipstick and mascara that I haven’t worn since I had kids and stopped having five minutes to myself in the morning. Don’t worry, it washes off the dog.

Tampons — It never ceases to amaze me what a 3-year-old will shove up his nose. For about a week after my son discovered this skill, he ran around shooting snot-covered tampons out his nose like a blow-dart. Not very effectively, I might add. However, even the most experienced nose-stuffer over-reaches from time to time. At least tampons come with a built in ripcord. I wish raisins did.

A Half Empty Bottle of Coke —  Soda bottles really are the perfect toy. They fizz, they splash, they make little whirlpools when you swirl them, and if you open the lid they hiss … and then spray sticky brown liquid all over the house.  It’s pretty much the toddler equivalent to cat videos on You Tube.

Any one of these toddler-pleasing gifts would make a popular addition under the Christmas tree this year. Even more importantly, none of them required standing in line at 2 a.m. on Black Friday in your pajamas. You’re welcome.

Once a cognitive psychologist in the field of memory, Mary Widdicks now spends the majority of her time trying to remember if she fed all her children each morning. The irony is not lost on her. She started writing about her life as the only girl in a house full of boys in January 2014 and has been featured on sites such as The Washington Post, Scary Mommy, and several parenting anthologies. In February of 2015 she gave birth to her first daughter and is now happily drowning in a sea of pink. Follow Mary on: Outmanned.