Chambanamoms.com is the top online resource for families in the Champaign-Urbana area.
Learn More | Advertise
You are here: Home / Blog / Reader Contributions / The Nutcracker Chronicles: On To Krannert 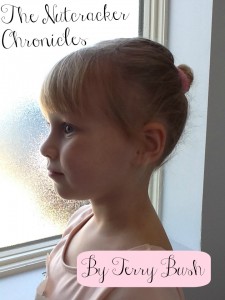 Since mid-September, the cast of Champaign Urbana Ballet’s production of The Nutcracker has rehearsed in their studios in west Champaign. The Monday after Thanksgiving they moved into The Krannert Center for the Performing Arts.

The Move
A crew of dads helped with the move. The inventory included the expected things like costumes and furniture. There was also a dragon’s head, 10 rat heads (with glowing red eyes), Mother Ginger’s skirt frame, a cannon, several fog machines, and a motorized scooter tricked out to look like a sailing vessel. It took most of the morning and two loads in a 25 foot U-Haul to get all the hardware into Krannert.

I’d never been in the Krannert catacombs before, the concrete block hallways that honeycomb the underworld of the five city blocks that Krannert occupies. The hallways have names like “First Street.” It’s the only way to give or get directions in this underground maze. The walls are adorned with autographs of some very famous artists who have performed at Krannert.

This was more than a move across town. This was a move into the big leagues.

First Rehearsal
Charly’s cast of Polichinelles had their first rehearsal in The Tryon Festival Theater on the Tuesday after Thanksgiving. We were told to enter via the lobby. Once inside, C-U Ballet representatives announced that we’d just made our last entrance as visitors. We were now performers. We would use the backstage entrance. There was a sense of great pride in that promotion.

The Krannert tech crew was busy on the stage. Loud horns and a flashing red light warned that the orchestra platform was being raised from the pit to stage level; someone started sawing a hole in it. Light cues were being tested. Fog machine hoses were getting laid out.

While the Polichinelles awaited their turn on the stage, their grown-ups were given the backstage tour. Special attention was given to the Polichinelle dressing room and bathroom. Their well-planned schedule would include a pre-performance bathroom break to prevent a potty dance from supplementing the choreography.

When we returned to the theater, two stage hands and nine kids were under Mother Ginger’s skirt. Mother herself was not there. As we watched from the wings, a recording of their music played, the stage hands rolled the skirt onto the stage, the kids emerged, danced, retreated under the skirt, and rolled offstage. It’s a good thing the dance is only two and a half minutes. I don’t think I could hold my breath much longer than that.

Maeva O’Brien, the company dancer who had worked with the kids from the beginning, walked over and talked to the skirt. “Polichinelles…quiet please. You did a great job. Now we’re going to do it one more time. This time, I won’t be on the stage prompting you. You have to do it all yourself.”

“That’s right, Polichinelles. You’re ready. You can do it.” Out they went. And they did it.

Dress Rehearsal
Dress rehearsal for Charly’s cast was on Thursday night. We’d been warned that it could be a late night, as scenes and dances are repeated to work out kinks in music or staging. We dutifully reported at 7 p.m. (Charly’s usual bedtime), and left our daughter with the dressing room wranglers, the moms who finish makeup, costume the dancers, get them into the wings on time, and back to the dressing room.

The Polichinelles danced flawlessly. When rehearsal ended around 10:30 p.m., we retrieved Charly from the dressing room. She was still buzzing with the excitement of being with all those kids and dancing on the stage.

First Performance
There is always an air of excitement and expectation before a live performance. It’s doubled when you know many of the performers personally.

But when The Nutcracker begins, you quickly forget how young the dancers are. They are professional. They have devoted years of training and months of rehearsal to this performance. They are focused. And they are impressive. The most frequently heard word at intermission is “Wow.”

The Polichinelles dance in the second act. We hold our breath as Mother Ginger rolls onto the stage. The kids burst from the skirt, seeing the hall full of people for the first time. The audience reacts and the dancers react to that energy. Their smiles get bigger; any concerns of stage fright have vanished. Everyone in the hall is into it. We hear words like “adorable” as the audience cheers and applauds these tiny dancers. And then it’s over.

After the show, we take Charly to the lobby where family and friends wait. All are very impressed by the whole production and by our little girl’s part in it. Charly gets bouquets of flowers, just like the ballerinas did during the curtain call. She’s almost in tears.

When I tuck her in that night, I know that visions of nutcrackers will dance in her head. “Daddy,” she says, as I kiss her goodnight. “They’re doing Cinderella in the spring. Do you think there are kids’ parts in it?”

Terry Bush is a writer, guitar player and retired university vice president. He teaches for the University of Phoenix on-line, manages the chambanamoms.com event calendar and serves as the domestic staff for his daughter, Charly.